You can find 2 different repair/service/workshop manuals for the Mazda MPV on this page that are in the PDF format, totally free of charge.

The years available stretch from 1992 through to 1996 and to view the manual you just click the name.

About The Mazda MPV

In 1988 Mazda introduced the MPV, a minivan that was based on the 929 large car platform.

It was originally offered with an optional V6 engine and had such large dimensions that it struggled to sell in certain markets due to being classed as a luxury car.

When the second generation was launched in 1999 the company moved the MPV to its own smaller custom chassis.

This new model was front-wheel-drive as standard (compared to the rear-wheel-drive offered before) which helped reduce weight.

It also shared this new platform with models such as the Tribute and the Kia Carnival.

Sales were helped even further by the inclusion of sliding doors compared to the traditional hinged ones found on the first-generation MPV.

Engines were revised downwards with many Ford provided engines now on offer and a turbodiesel to help the car sell in Europe.

New safety features were added almost every year that the minivan was on sale to help its appeal to family car buyers.

In 2006 a third and final generation was launched using the Mazda6 as a donor car for its platform.

Choice of engines was lowered to just one of two gasoline options, a 2.3-liter with or without a turbocharger fitted.

All of these second and third-generation Mazda MPVs were sold with an automatic transmission only.

This third-generation model was not sold in the USA, instead, Mazda offered the CX-9 to cater to those looking for a spacious family car.

In 2016 the MPV was discontinued as many car buyers were moving away from minivans and looking to crossover SUVs for their practicality. 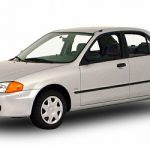 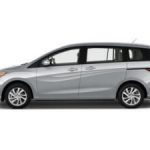