You can find 1 different repair/service/workshop manuals for the Chrysler Pacifica on this page that are in the PDF format, totally free of charge.

The years available stretch from 2003 through to 2003 and to view the manual you just click the name.

About The Chrysler Pacifica

The Chrysler Pacifica is a minivan that was introduced during the 2017 model year after production began the year before.

It replaced the Town and Country as the American automaker’s flagship minivan model.

The Pacifica also led to the discontinuation of the Dodge Caravan and Grand Caravan in 2020 from the sister company as it replaced the line with a rebadged version.

You will only find these cars with one size of engine under the bonnet, a 3.6-liter gasoline V6.

Customers can choose however to add a plugin hybrid system to the car that allows it to be charged up from a mains outlet to run on electricity alone.

The plugin hybrid (PHEV) Pacifica can run on electricity alone for 33 miles (or 53 kilometers) on a full charge before the engine has to kick in.

This PHEV version of the car came onto the market a year after the standard version and can achieve 84mpg-e, the standard front-wheel-drive version can only get 22mpg.

Power is transferred to either front or all four wheels (decided when purchasing the car) through a 9-speed automatic transmission or a CVT for the hybrid version.

Underneath the Pacifica is the Compact US Wide platform that is used by many other Fiat/Chrysler vehicles.

Most notably is the newer Jeep Cherokee crossover SUV and the older Chrysler 200 sedan.

When the Pacifica was tested by NHTSA in 2017 they found it to be amazingly safe with perfect scores across all disciplines except rollover where it scored 4 out of 5 stars.

Thanks to this amazing safety score the car went on to win numerous awards from motoring publications such as:

Plus many more across fields including awards decided by its readers who own the car in real life and use it day-to-day.

To keep up with the auto market that is continuously moving away from minivans to crossover SUVs Chrysler had to pack as much technology and features as possible into the Pacifica.

Keeping with tradition, this minivan boasts the company’s cutting-edge customization technologies that allow the seats to be moved around along with the table.

This helps the car maintain its image of being an all-around vehicle for the family to get around as well as transport cargo.

Modern examples of the Pacifica boast an Android-powered 10.1-inch touchscreen infotainment system with Apple and Android connectivity for mobile devices.

In the 2020 model year, a low-end version of the Pacifica was used to create the revised Voyager model, sold exclusively in the United States.

At the same time, Chrysler discontinued the L and LX trims from the Pacifica and essentially shifted them over to the new Voyager model.

The Voyager name had been used in the past up until 2016 for a minivan that was built on the same platform as the Town and Country. 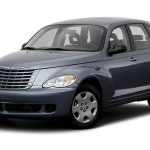